When we bought our property in Bloomington, we knew that it came with a ‘karst preservation easement'(20.07.070 e5(A)),  that forbid us to alter the geology, and required us to plant it in native plants.  For some, this would be a detrimental restriction on the property, but for us it was an excuse to ‘go native’ and justify not having a neatly mowed green lawn.  The property intersects a ‘dog bone’ shaped area that is the karst, with the outer ends being 25 ft radius circles.  The northern circle is a wet area, and the southern area has a small sink hole from which several black walnuts are growing.  While this is labeled by the city as a karst, it doesn’t show up anywhere on the Indiana Geological karst maps (2011 survey).

The lot was a typical development, cut out from an old farm pasture.  Historical maps of Indiana show no prairie in southern Indiana (it was traditionally woods), so the idea of planting native became somewhat of an inside joke (are plants from a nursery in central Indiana native?, are the same species brought over from Missouri native?).

The first thing after purchasing the lot was to throw out some butterfly weed seeds in the wet area. Outside of a 10 foot circle of reeds and sedge became a ‘kill zone’ of spraying Round-Up on the orchard grasses.  This spraying was repeated on several subsequent visits to the lot.

After moving into the new house, the karst are was fairly torn up from construction traffic, and the herbicide had taken care of the rest.  Raspberries and wild rose (non-native) were cut back from the sink hole.   The area to be planted was worked up with a de-thatcher in preparation for planting.  From the previous fall, I had collected a number of seeds.  A 10 ft strip by the street was seeded with Buffalo grass, so the prairie would look like a deliberate planting and not a neglected patch of weeds.  I had a number of plants which I had purchased or collected in Missouri (dropseed, Jerusalem artichoke, palm sedge, golden ragwort, New England aster, blue flag, hazelnut bushes, beauty bush, service berry).

Several trips were made through the spring to EcoLogic (a local native plant nursery) for additional plug plants (liatrus,  compass plant), along with opportunistic transplants from All Saint’s Orthodox Church’s construction site (daisy, cone flower). 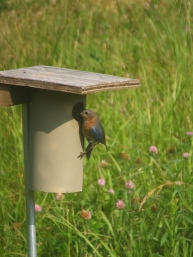 As expected, growth was slow on the small plants, and the annual orchard grasses took advantage of the open soil; delightfully a number of natives also showed up on their own (golden rod, jewel weed, blue eyed grass, iron weed).

A lot of seeds (liatrus, rattlesnake master, compass plant, prairie dock, false sunflower, coneflower, siena, common milkweed, swamp milkweed, little bluestem, tickseed sunflower, wingstem) were gathered through the summer and fall, and sown over the prairie area in early December, many of these seeds were also planted in several raised beds, for transplanting in the future.

I am always impatient and thinking that things won’t come back, but gardening takes patience.

The shortage of liatrus may be due to vole damage.  With the grass cover this winter, I expect they had a good time of it.  I noticed that the soft potting soil was dug out where several plants had been, and expect they went for the roots.  Waiting to see if the Jerusalem artichoke also was part of a banquet (the dirt is quite excavated there).

Deer have eaten back the plum and many of the bushes.  A buck antler rubbed the service berry and killed the main trunk.

EcoLogic is ending their nursery, so bought a good bit on sale: